by Shawna Clingerman | All About Me | 4 comments

I’m very excited about the new year over here! I see really great things personally, in business and for my family this year!!  I plan to have the blog hoppin’ with the help of my team, AND I plan to embark on Project Life this year, so I can’t wait to share my adventures with you there too!!!

For today though, I just wanted to share our Christmas Card and the super fun letter my hubby wrote for everyone because I feel like it should go down in history on the bloggy 🙂 Last year when we were waiting anxiously to see if we would get our dream home I had a dream in my brain of a Christmas photo just like this one, so this card means a lot to me in more ways than one! 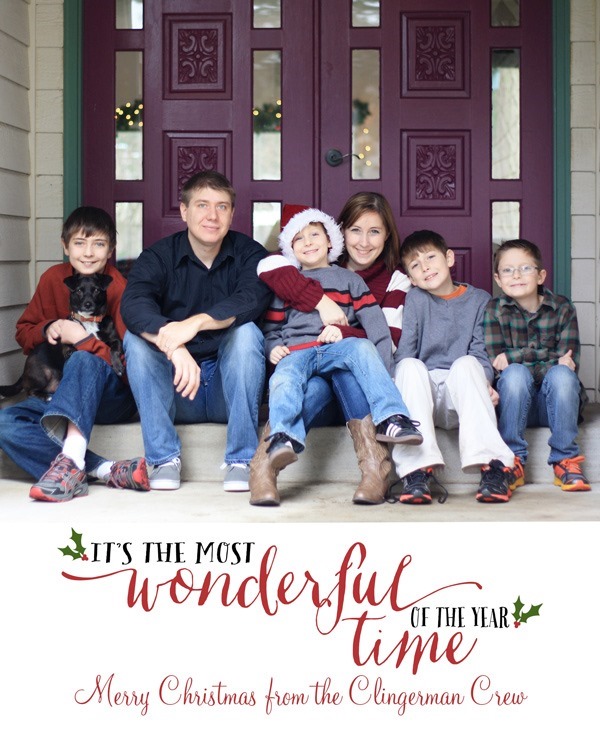 The West Coast Clingermans have been busy this year: a new house, new school, new job, new alone time. It was a year for new!

We recently bought a new house that was just ½ a mile from our old house. It has four times the space and we absolutely love it. We got it for a steal since it was a short sale but it was an agonizing, stress filled 6 months as we made the offer (in November 2012) and waited for the three banks involved to approve (happened in April) and then a few more months of scrambling to get the finances together and we finally let out a sigh of relief as we got the keys to our new home in June. The house needs a lot of work (a LOT of work) but it’s got good bones and we’re ready to make it our forever home. Each of the boys have their own room and Shawn and I managed to get our own individual offices. The house comes with a lot of currently non-working perks that we’re excited about as well: an in-ground swimming pool, an indoor hot tub and a sauna! None of them work and things like leaking toilets, holes in the walls, old carpet, peeling paint and lots of cleaning take a higher priority…but someday!

With the move, Reece and Owen had to switch to a new elementary school. The boys handled the change very well and both love their new school and are making friends. Tennyson also started Kindergarten this year so all three of them are going to the same school!

Tennyson going to school introduced another new for us this year, particularly for Shawna. This is the first year since we’ve been married (13 years!) that she’s been home without any of the boys! There were some tears at first (her babies are all grow’d up!) but it’s been an exciting new change as well. She loves the new freedom and having the extra time to work from home.

Since we haven’t sent a Christmas letter out for a while (I think it’s been 2? 4? 6? years??) you might not know I started a new job. In April of 2012 I moved to a company a little closer to my home (only 7 miles). They do mobile development which I hadn’t done before so it’s been a lot of fun learning some new technologies.

Phew! Now with that lengthy introduction out of the way, let’s get into some of the details of just what each of the West Coast Clingermans have been up to. This should only take another 20 pages or so so let’s dive in!

Shawna has been loving the new home and all the space that comes with it. Having her own studio/office has been inspirational and she is continuing to grow her design business. With her extra time working from home (no kids during the school day!) she has been doing just that.

My firstborn son, in whom I am well pleased, has been taking advantage of having all this space in the new home (and his super large room) by having friends over all the time. School has been going great and is a nice challenge for him. In his spare time, besides long walks on the beach reading Russian poetry, he enjoys gaming, programming, learning, rock climbing, hanging out with friends, playing with our dog Guster, parkour and playing with his brothers.

Owen, our stick thin, always hungry, walking encyclopedia, is most proud of finally learning the algorithm for solving a Rubik’s cube. Owen’s in a pullout program for school called Excel and absolutely loves it. They’re messing around with robots, physics, tangrams and even calculating trajectories for getting a hole in one for miniature golf. When’s he’s not busy doing schoolwork he’s busy playing legos, playing videos games and watching Minecraft and Terraria videos.

Individuality, creativity and personality are constantly streaming from Reece. Everything he does, he does big and in his own unique way. Reece has breathed a big sigh of relief at having his own space in the new house. His room has become his refuge and a place where he can escape the noise that comes along with having a big family. He like his new school, but thinks a few of the rules there are a bit dumb (like when all the swings are full, kids can stand and count to 30 and kick you off, big drama for a 9 year old!). Video games, playing electric guitar, making card games, playing Minecraft, writing and drawing are just a few of the ways that Reece like to express himself in his freetime.

Energetic, compassionate, bursting with life and in his own little world, Tennyson is friends with everyone and everyone is his friend. Kindergarten has been good for Tennyson. He loves recess, he’s learning a lot and his teacher’s have confirmed that everyone loves him (they fight over who gets to sit next to him!). Tennyson’s big moment for the year was going to Disneyland with Grandma Darla and Grandpa Maurice where he rode Splash Mountain five times (the number seems to change each time I ask him!) When he’s not busy telling you crazy stories, Tennyson like watching shows on Netflix and using his imagination with his make believe worlds and his costumes.

I’ve been adjusting to our new house. It’s weird owning two houses (can’t wait to sell our old home!). I love my new office and had a lot of fun putting that all together. bought a 1978 Ford pickup which has been fun. Work has been great, they seem to love me there and I’m enjoying it so far. In the little free time I have, I’m working on another Xbox game that I wanted to release year but that’s not happening so hopefully I can get it done for next year.

So that’s our year! It was a fun one filled with Vegas business trips for Shawna, knife fights over pop-tarts at home, leaking toilets and elves that can’t seem to behave. Shawna and I both are pretty active on Facebook so if you’re ever interested in what our family on the west coast is up to or want to get in touch that’s the best way. Thanks for reading, hopefully it was a fun one. We love you all!

Happy New Year to all of you!! May 2014 be filled with love and happiness, family and friends, and maybe even a few dreams come true too!