Merry Christmas, Happy New Years and all of That…

by Shawna Clingerman | All About Me | 0 comments

Someone recently told me that a Christmas card isn’t late as long as it makes it there by January 6th in time for “Epiphany” which I didn’t even know was a thing, but hey I’ll totally take it!  Although I did get my cards sent out this year, I didn’t want to let the year go by with out also sharing on my blog – there is something about being able to just look it up online in future years that makes my life awesome, plus this blog is a chronically of my own life and George wrote an awesome letter with a great re-cap of the year that I’d love to have saved here in digi-eternity.

So before I post my new years post (and I do have one waiting!) I had to get this up here – Merry Christmas dear friends, hope your holiday was amazing! 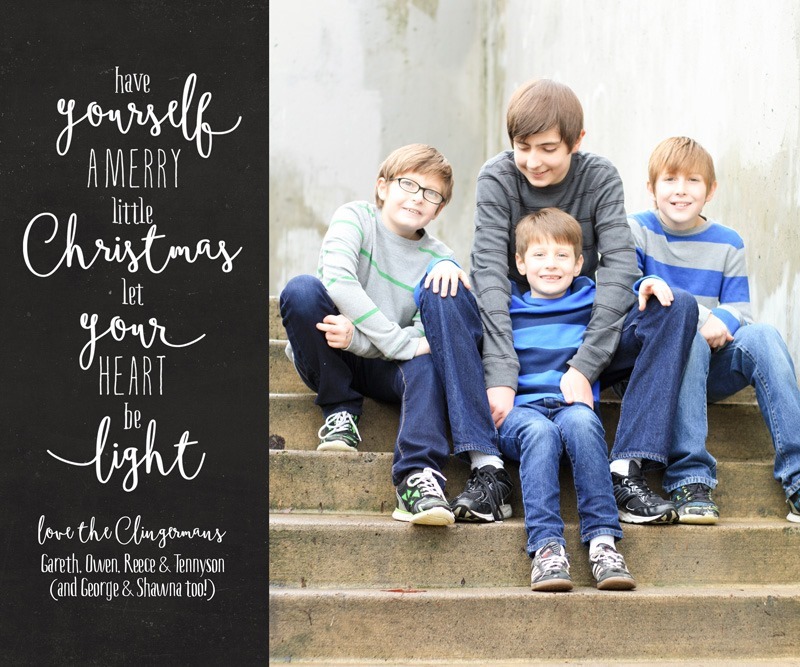 I debated whether I should write a letter this year or not but then Shawna said it was up to me so I knew I had no choice but to write one (after you’ve been married 15 years, you learn a few things…).

I am going to keep it short though because we are in full on holiday craziness here! Christmas crafts everywhere, shopping isn’t done and Amazon packages are being left on the doorstep hourly, the lights aren’t even up outside yet! Lots to do and not a lot of time left to get it all done. I’m actually still a little chilly from walking back from Tennyson’s school Christmas sing! We are busy! That has been the theme of this year. Busy!

We’re still working on the house. I just about have all of the flooring I purchased last year put down (just some closets and one small bathroom left to do). Then it’s putting on trim and transition pieces everywhere. Progress isn’t going as quickly as I’d like, but there’s been a lot of other things in between working on the house. What is done is looking good though and the pool was so much fun this summer and our working hot tub (thanks to Shawna’s dad!) has been so relaxing this winter!

Tennyson is invincible. Or so he thinks. That kid is falling down the stairs constantly, jumping off things, taking corners too fast. I’m not sure there’s a day that goes by where he hasn’t injured himself through sheer joy of life. He’s always smiling and always going through life at a breakneck speed (his guardian angel stays busy!). He’s also got a big heart and cares so deeply for other people. I wasn’t sure he was going to make it through watching Pixar’s Inside Out with us, he was in agony and crying over everything happening. He’s like that with his friends at school too. That boy knows how to love which has been great for Shawna. He’s got her wrapped around his finger!

Reece has joined band and is one excited percussionist drumming constantly day and night. He’s really been taking it seriously. He’s also been expanding his social world and is keeping Shawna and I on our toes! This digital age presents a lot of new challenges and new frontiers and Reece our social butterfly is anxious to be exploring all of them. Skype, Xbox chat, Facetime, Instagram, Pinterest..it’s a whirlwind (but we monitor very closely!) Been an extra interesting challenge for me since I’m not very social at all!

It’s been interesting watching Owen get more serious as he gets older. He’s got a competitive streak in him that takes you by surprise because he seems so passive most of the the time. He plays soccer through most of the year at this point shifting from indoor to outdoor and still absolutely loves his team, the coach and the sport. He’s still playing cello like his older brother did and seems to really have an ear for music. This past year Owen’s shifted from wanting to be an architect to now dreaming of becoming an aerospace engineer and working for Boeing. With his head full of facts and his love for math and science I can see that being a possibility! Owen is pretty lucky because his closest friends all live just up the street and they’re all into classic games (which is lucky for me because I’m a geek god to them!). He spends a lot of time gaming and hanging out with them. One of his more impressive accomplishments this year was taking his NintendoDS apart when the screen stopped working and fixing it. Didn’t even ask for my help, just watched a few videos and grabbed a screwdriver and made it happen.

Gareth had to stop doing cello because it didn’t fit with his accelerated high school schedule (he starts college next year as part of a special high school program for juniors) but he’s picked up guitar so he’s still making music. He’s getting tall, just about half an inch shorter than I am (although as fast as he’s growing by the time I finish this sentence he might actually be taller than me!) School is pretty boring for him and he’s excited to start working so things should be looking up for him next year. Can you believe he almost has his driver’s license? He wants to practice all the time which Shawna has been loving because he’s become her permanent chauffeur for all errands!

Shawna started taking college classes at the beginning of the year working on getting her design degree and then because having her designing job, being a college student a wife and a mom wasn’t keeping her busy enough she also accepted a position at our church to be the Director of the Children’s ministry. She is busy! (see our theme?) Even with all of that she’s been working out and running (5 miles in an hour!) and just to make her life even MORE interesting she’s been working hard (and with the doctors) to slowly step off her medications this year and she’s down to the final dosage. Big steps and exciting ones! Then the icing on the cake, she got a contract with Becky Higgin’s Project Life and got asked to create one of their Project Life kits. Her Explore Edition kit went for sale just a few months ago (and might even be in a craft store near you!). I’m not sure how she’s going to top all of this next year, this was a big year for Shawna!

My year has felt fairly productive as well. I signed up to do a Spartan race earlier this year and that sort of kickstarted a whole weight loss going to the gym everyday thing for me. I lost 30lbs I didn’t know I had to lose and I have been getting stronger and faster. Feeling a lot healthier and I’ve had a lot more energy to get things done (good things because this house still needs a ton of work!). I’ve been working on my game a lot more, really trying to get it released next year (hopefully that exciting news will be in the next Christmas letter…) and I’ve just been having a lot of fun living a really good life. We are very blessed and I’ve been enjoying that this past year. I’m so proud of everything my family has been accomplishing. They work hard and are reaping the rewards!

So that’s my family! We’ve had a big year and hopefully you enjoyed a little peak into what’s been going on with us. We miss all of you and hope you have a very, merry Christmas!

Ok, enough chit chat, time for me to get back to work. Merry Christmas!