by Shawna Clingerman | All About Me, Mental Health | 6 comments 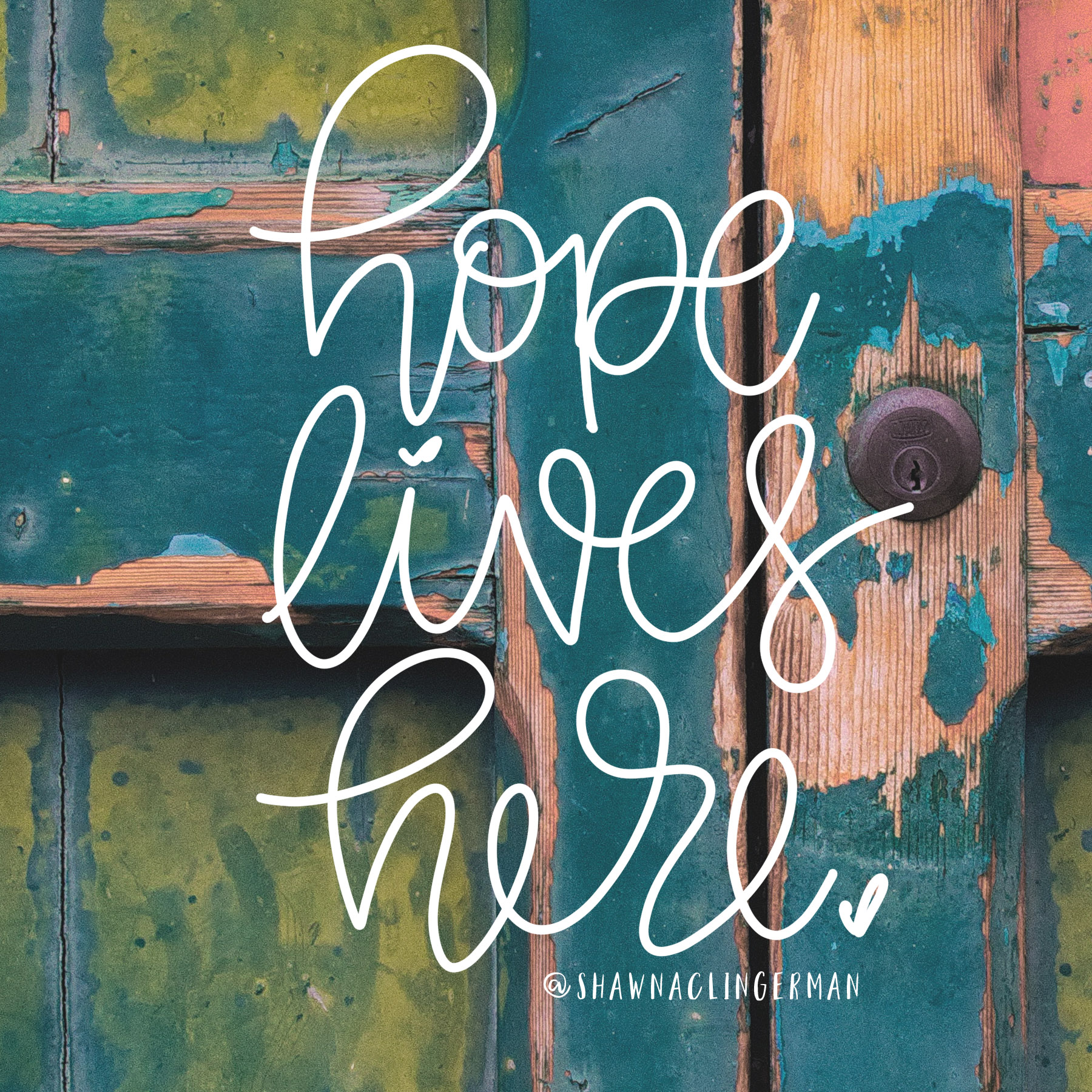 Today, I am going to talk about something that I notice a lot of people get squirmy about…. There is something about being in a psychiatric inpatient hospital that makes people anxious… I think it is a lot of it is some of the preconceived ideas that I shared yesterday… We don’t do a good job of educating people the levels of care out there, that not every facility is high security-risk-to-others type situation. We leave this subject in the dark, we let shame own it… and we lose actual lives as a result.

G followed the ambulance to come sign papers and check me in to “The Second Floor” of the hospital on the other side of town.  When he held me there, and then had to say goodbye and leave me, I think it was a pretty terrifying moment for both of us. Up to then my he had been my lifeline… imagining letting him leave me there seemed crazy… And to him I think, his #1 job had been to keep me safe, so leaving me behind seemed really counter to that mission that had been his primary purpose for so long…

However, he was so tired SO tired, and I was so weary and sad… I am sure that there was a little relief of some of the weight he had been carrying when it was no longer all on his shoulders. For me, there was a huge relief too, relief of ALL of the guilt I’d been holding on my shoulders, for what I’d been putting everyone through… a lot of that guilt was part of my sickness and wasn’t really about  There was also this tremendous sense of relief that I didn’t have to keep my own self safe anymore… because I was so tired of fighting – so so tired.

As soon as he left it was late and I had a moment of lonely panic….but the nurses, those kind, angel nurses came and found me right away, and they gave me medication that calmed me down.  You know I think this is a piece that movies and tv shows always get wrong, the idea that like meds are being forced on people that it is an awful thing that patients don’t control…. and now, I know it is in some scenarios… but when you sign your own self into a hospital, you are there to be cared for, and you aren’t treated like you have no rights, they always asked me if I wanted something to calm me down before medicating me, they always treated me like a precious respected person… The first time they gave me a dose of Ativan, I remember it… the instant lowering of intensity, the calm. Meds like that are obviously not a good life-long solution to mental health issues, but it sure was a welcome God-sent relief for me in that tterrifiedmental space.

The whole time I was there, every time I felt lonely or invisible or afraid, somehow one of those nurse angels found me, they saw me every time, right away… and they took care of me. There was a re-assurance in being watched, being cared for like that. It was absoulutely, exactly what I needed.

There were regular meals (a new thing for me, I hadn’t been feeding myself well for months), a daily group meeting, there was a daily evaluation with a psychiatrist, but other than that my time was my own. I shared a room with a few other girls, and I could come and go as I please around the floor. The first 2 days, I did mainly a lot of staring into space… a lot of puzzles (oh the puzzles! I believe that this is where my deep love of puzzles was born.) I was medicated, I was traumatized from the past several months of being in constant fight/freeze/flight mode, I was tired… but I was also clearly safe, and I didn’t have to worry anymore about what I was going to do next, it was truly a game changer for me.

There were so many precious people at that hospital. I can’t even tell you. As we were there together we all started to feel a little like family. The stories, of the wide variety of humans, all hurting, all struggling to live. There was the young guy, tough and mean and harsh at first but when you called him on his crap he was so tender deep down… There was the young man who was kind as can be, open the door for others, nod his head to you every time he sees you polite, yet talked into imaginary walkie talkies all the time.  There was the guy in his late teens who had been living under bridges up and down the Pacific coast for years… and didn’t know where he would go when he got out. There was the young girls, a few of them, who seemed too cool for anyone at first but were so heartbroken and lonely and desperate for love. There was the dad in his mid-forties, who chose to get elective shock therapy treatments because he was so desperate to get well for his kids. There was the transgender boy, precious and kind and shy, he tried to take his life two different times while I was there. There was the precious grandmother, a woman I will honestly never ever ever ever forget for her compassion and tenderheartedness, she was clearly an absolute light in the world, yet she had nearly succeeded at attempting suicide a few days before.

The hardest part of the whole experience, in hindsight, is that I will never know how these people are today. I wish times 1000 that I could go back and hug each and every one of them. I wish that I could know, with out a doubt that all of them are ok today… instead they are just precious reminders, beacons of hope and of hurt… representations of so many people we all meet every day. No one is immune to the struggle of mental health, there isn’t just one type of person one life path that leads to taking your own life.  All of us were so very different, yet all of us are the same. That is a powerful powerful thing.

During my hospitalization the main goal was to find a medication, or a combination of medications, that would actually have an impact on my mental chemistry… the beauty of the hospital setting is that they don’t have to do the slow six week step-ups of medications that you do when you start meds outside of the hospital. They took my blood pressure all. the. time. Monitored levels in my blood. Did regular check-ins and evaluations of what did and didn’t work. It took them a full week to find the right combination. Just as long as I think it should have, I really believe I was there exactly as I was supposed to be, for the perfect amount of time. I can remember the day it took effect, the magic cocktail had come together… because I all of the sudden, I felt ok. I felt lighter. I think that was the first time I felt like I was going to be a survivor.

After being checked out I spent a month in their outpatient program, which was a huge gift. I spent all day at the hospital 5 days a week like it was my job – and we learned all about mental health, coping strategies, skills, confidence, how to check in with ourselves, how to handle backslides, how to be honest in our truth. It was a life-changing program that gave me skills I carry around with me even today.

I could go on and on, honestly, about what a gift my time in the hospital ways. I am SO very grateful that I had the courage to go there even though I didn’t know what was behind those doors.  I missed my kids (then 9, 5, 4 and 1) I missed my husband so much, and I KNOW that all of their hearts were hurting and worried about me…. but I also felt so much relief in not being a burden on them for a little while I got my brain straight.  Probably the hospitalization part of this story was a million times harder for them than for me…. but no doubt for all of us it was a gift. Because it saved me, it gave me exactly the things I needed.  There are so many gifts throughout my life, that has made my story one of hope and health and happiness, but on that list certainly belongs “The Second Floor”. Because it is the place where the seed of hope was planted in my soul again.

Why don’t we talk about these things? I think a lot of people assume when their friends come home, that we wouldn’t want to talk about this mysterious terrible place, and people assumed that no one wants to be burdened with it…. but honestly, I wish we were ALL a little more brave about it. That we could cut through the silence and dissipate the fear. Because we don’t serve anyone when we keep our stories a secret when we hold back.

If you have a friend who has been through something that you think was probably scary… be brave enough to ask them about it. Say “What was it like?”, “How did it feel?”, “Do you want to talk about it?”.  And if you have been through an experience like this, be brave enough to share how it was, the good and the bad of it, because I think that the mystery of it, the silence of it always makes it more frightening.

I am not saying it is not ever a scary place, or that it won’t be at all scary to talk about or ask about or to listen and to share. But friends, EVERYTHING looks scarier in the dark. Let’s leave the shame behind with this subject. Shame binds and destroys. Shame wants us to be silent and afraid. Shame wants to keep us in the dark.